Over the Easter break this year, I took four days to enjoy a part of the country that I’ve never investigated fully since I’ve lived here, Snæfellsnes. This peninsula is part of west Iceland and you can reach it from the south by taking the last exit out of the roundabout just after you pass through Borgarnes.

Many things have been said about Snæfellsnes: that it is “Iceland in Miniature”, that it is featured as the entrance point for Jules Verne’s classic Journey to the Center of the Earth, that it is a magical place and a focal point for believers in elves and practitioners of the Ásartrú religion. And for the interests of consistency we will state the same here, but few guides will go into the same obsessive details that we will pursue here, since four days is enough time to see every single point of attraction that there is to find on this incredible piece of geography jutting out into the North Atlantic ocean.

Driving out to the peninsula from Reykjavik takes about 3 hours if you’re making the full trip to the end of the line, which we did. Of course, the road loops right around the coastline through the national park, so you never really reach the end, but our final destination for the night was the little fishing village of Arnarstapi at the foot of Mt. Stapafell. 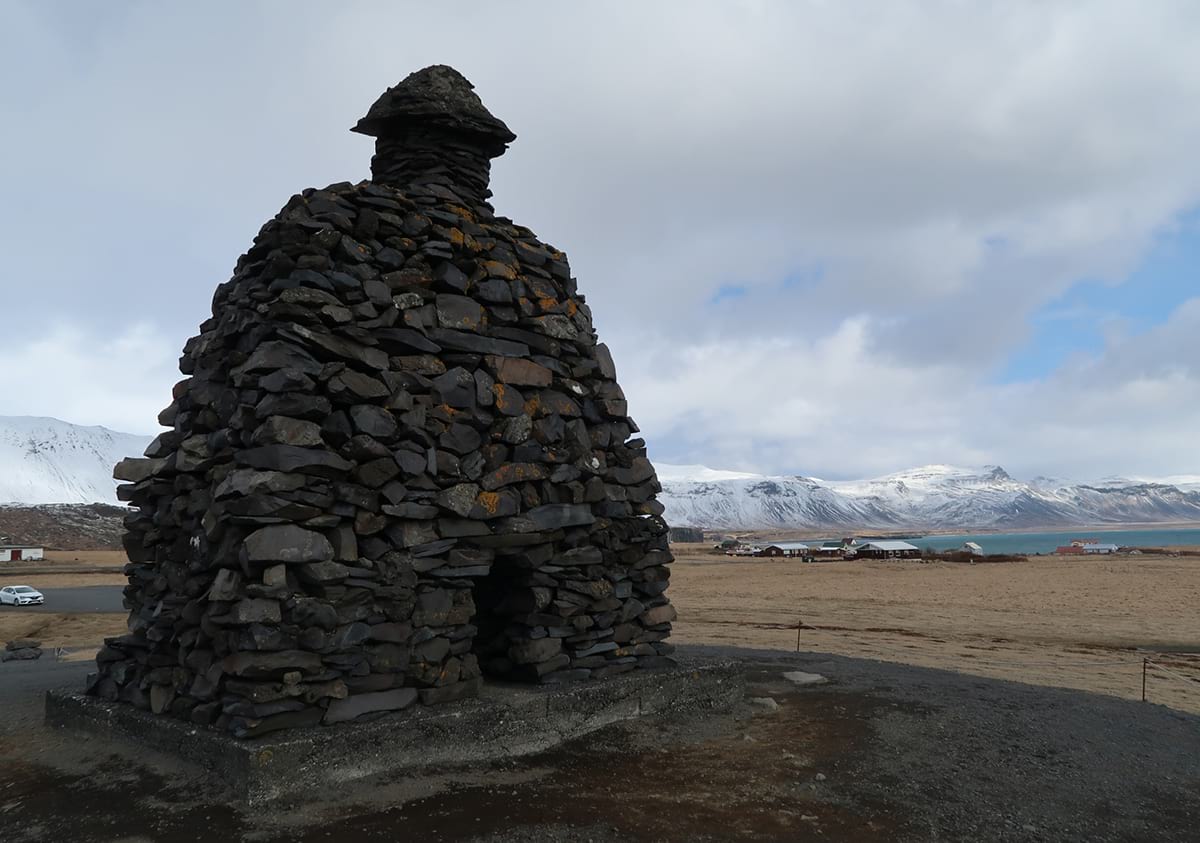 Arnarstapi is cold in March, although I can’t imagine it getting too much warmer being so close to the south side of Snæfellsjökull. The village is the setting (along with nearby Hellnar) of the saga of Barður, who was half-human and half-ogre, and was known for murdering some locals, whom he thought had been responsible for the death of his daughter. It’s also a wonderful place to take a walk on the beach, as the local coastline offers up some of the best photographic subjects that you’ll find during your trip here. This mountain and village also happens to be the spot where the characters in the Jules Verne novel stop before they climb the glacier to go into the depths of the Earth.

A quick exploratory trip up the road to Snæfellsjökull told me that I wouldn’t be going up there on my Dacia Duster, despite the working 4-wheel-drive and snow tires. The road was very clearly closed and I figured that with the night coming on, it would be better to experience that with a guide rather than risk my vehicle. Erring on the side of caution is a good idea for anyone visiting Iceland, but particularly where glaciers are involved.

We made our way down to the cabin for the night and got an early rest so we could explore better in the morning.

Our morning was packed with sightseeing around the Snæfellsjökull National Park, which begins a few kilometers down the road from Arnarstapi. 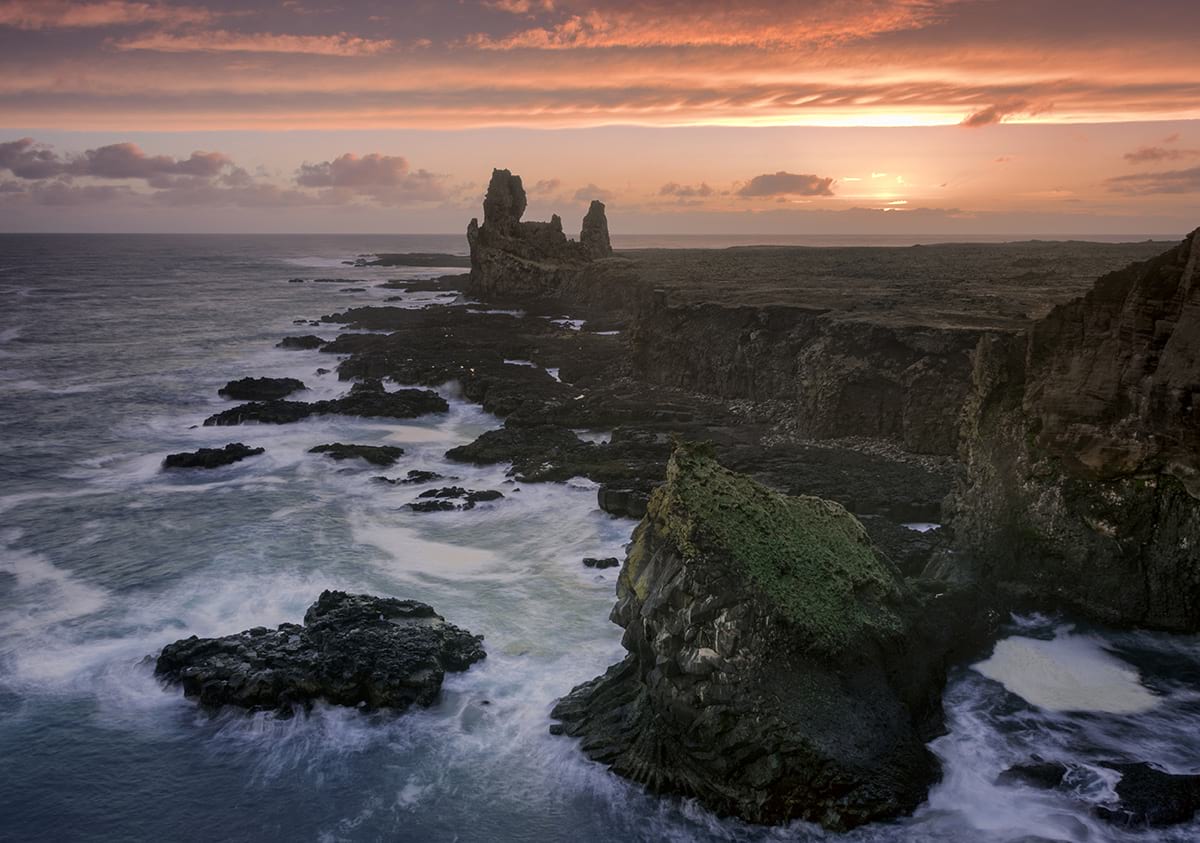 The basalt columns at Lóndrangar were the first awe-inspiring moment of the trip as they became visible on the horizon from quite a distance back and slowly increased in size until we reached the rest stop and took a walk down to the beach. These gigantic natural structures have been slowly eroded away out of softer rock and stand at 75 and 61 meters tall each, a fact that photography of the area never seems to capture. They are home to a cacophony of bird’s nests from a variety of species including the ubiquitous puffin. 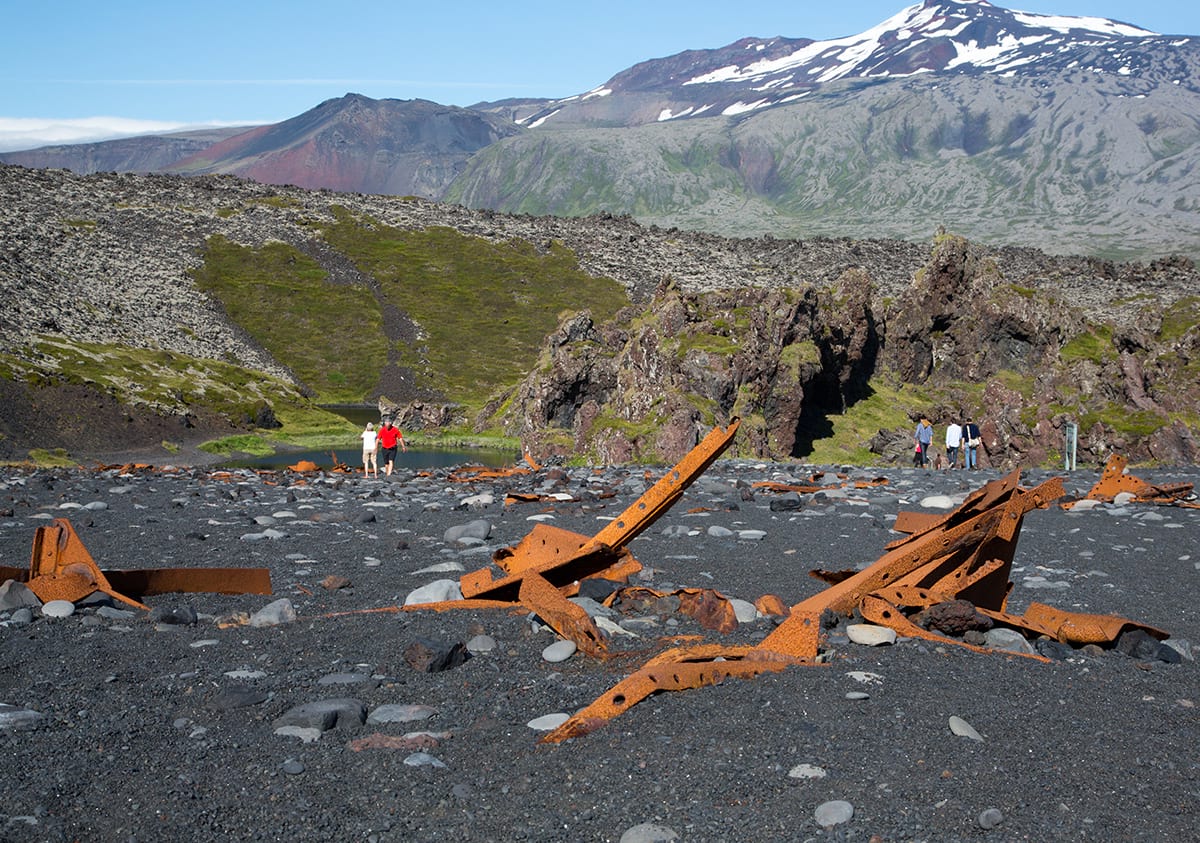 On the advice of our man on the ground (a friendly local who enjoyed telling us all about the history of the area), we skipped the cave in Vatnshellir and made our way directly down to the grey beaches at Djúpalonssandur, where pieces of a shipwrecked Grimsby fishing trawler have been eroding on the shore ever since their unintentional landing in 1948. 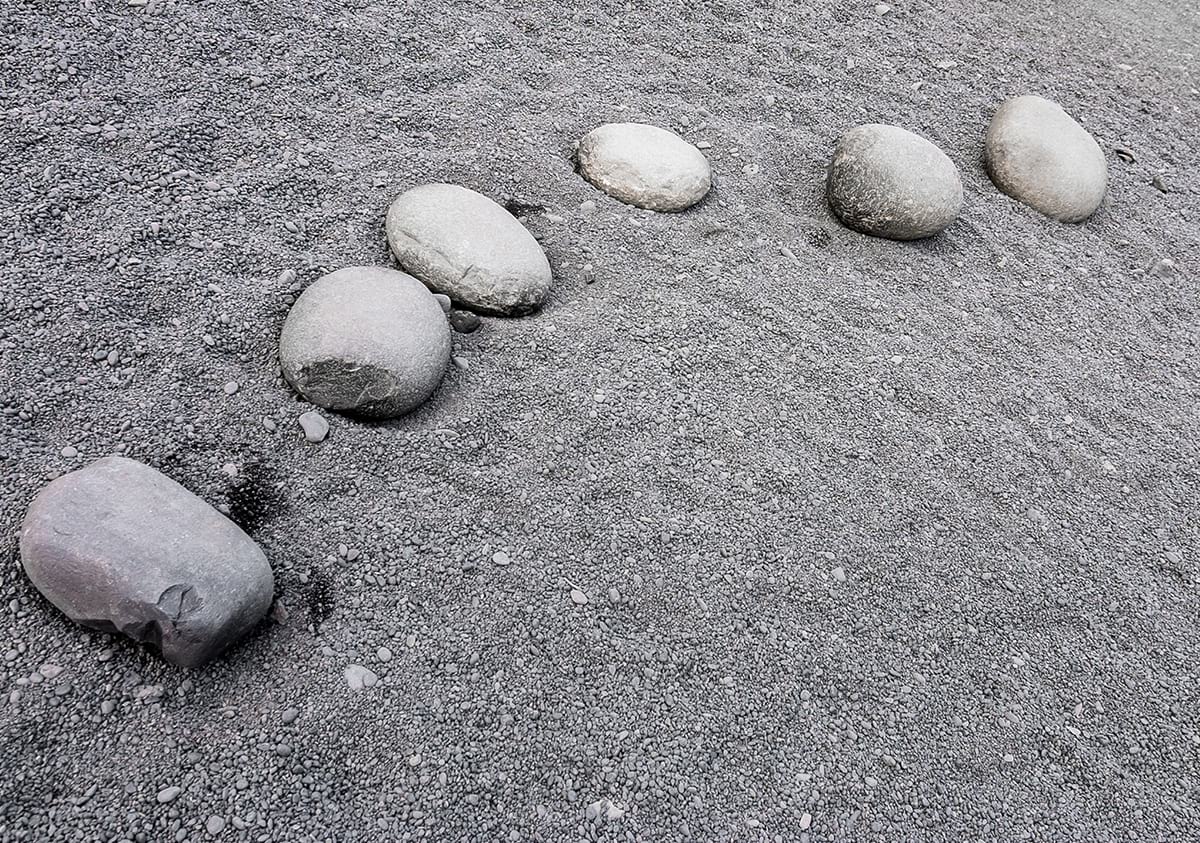 Four lifting stones for fishermen to test their strength are also found here, although I decided not to test my strength (or my back) on this particular occasion, since we still had several days to spend here and it seemed a waste to spend it all in bed. I saw that the tourists who joined us later on the beach were not as cautious and decided at one point to mix and match their Icelandic iconography, forming them into a rudimentary cairn.

Hellissandur was our next stop, where we found “The Tallest Structure in West Europe”, a radio tower for the Icelandic National Radio and a fun place to stop if you like impossibly long guy wires. Joking aside, standing at the edge of Iceland as we were, with the sun splitting beams of light down onto a turbulent ocean through the clouds, I felt happy. The kids were asleep in the back of the car as they usually are when I call to them to see their beautiful country like a proper middle-aged parent. 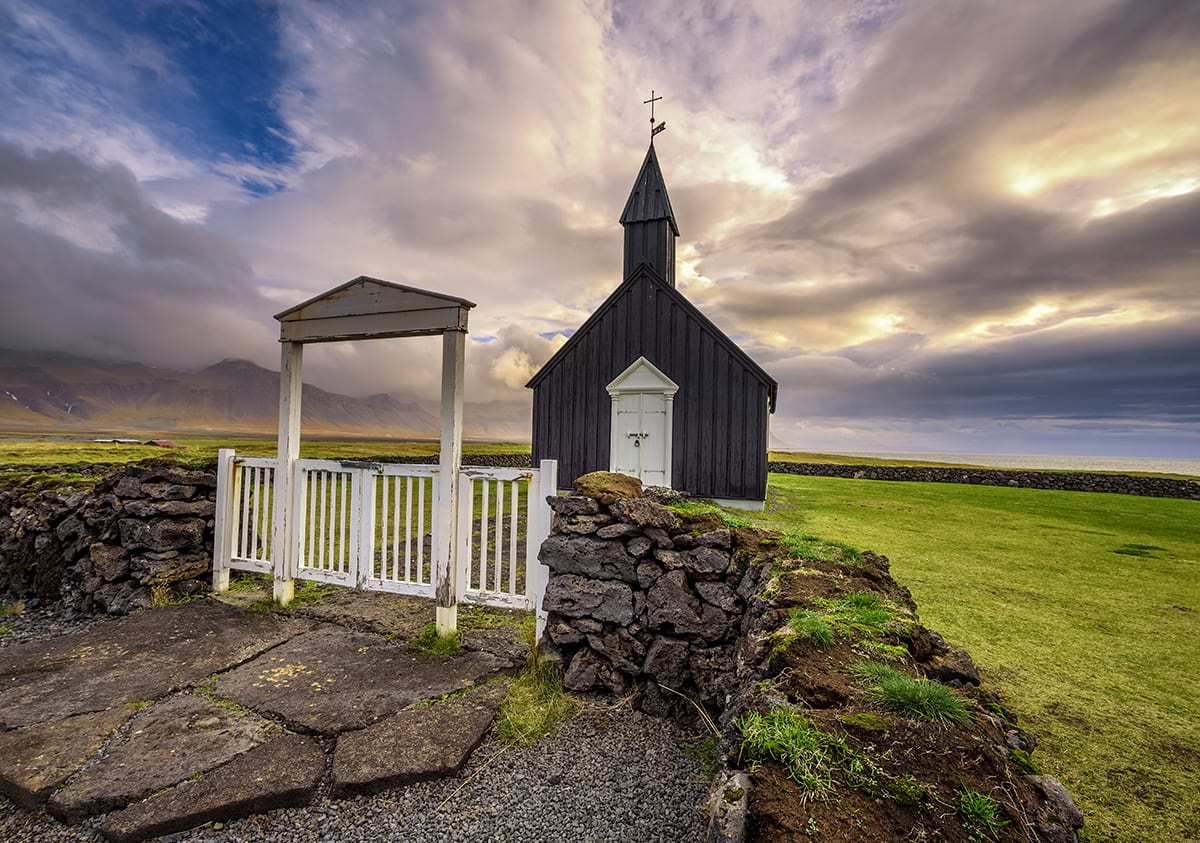 In the afternoon, we decided to join our friends to visit Búðir and from them we heard the story of the Rauðfeldsgjá, where Barður threw the two brothers Rauðfeldur and Sölvi after he lost his daughter at sea. The Icelandic sagas are a treasure trove of macabre explanations for many of Iceland’s most astonishing natural attractions.

Búðir was our next stop, where a black church sits on a windy field and a line of photographers stand waiting for their turn at capturing the angles of its far-flung Christianity. I made my own attempt, although I am no photographer and the cold wind made us run fairly quickly for our jeep again. If I ever travel Snæfellsnes on a budget, I thought, I will definitely stay at the Hotel Búðir, which looks like a great spot to make home base for a full exploration of the peninsula. 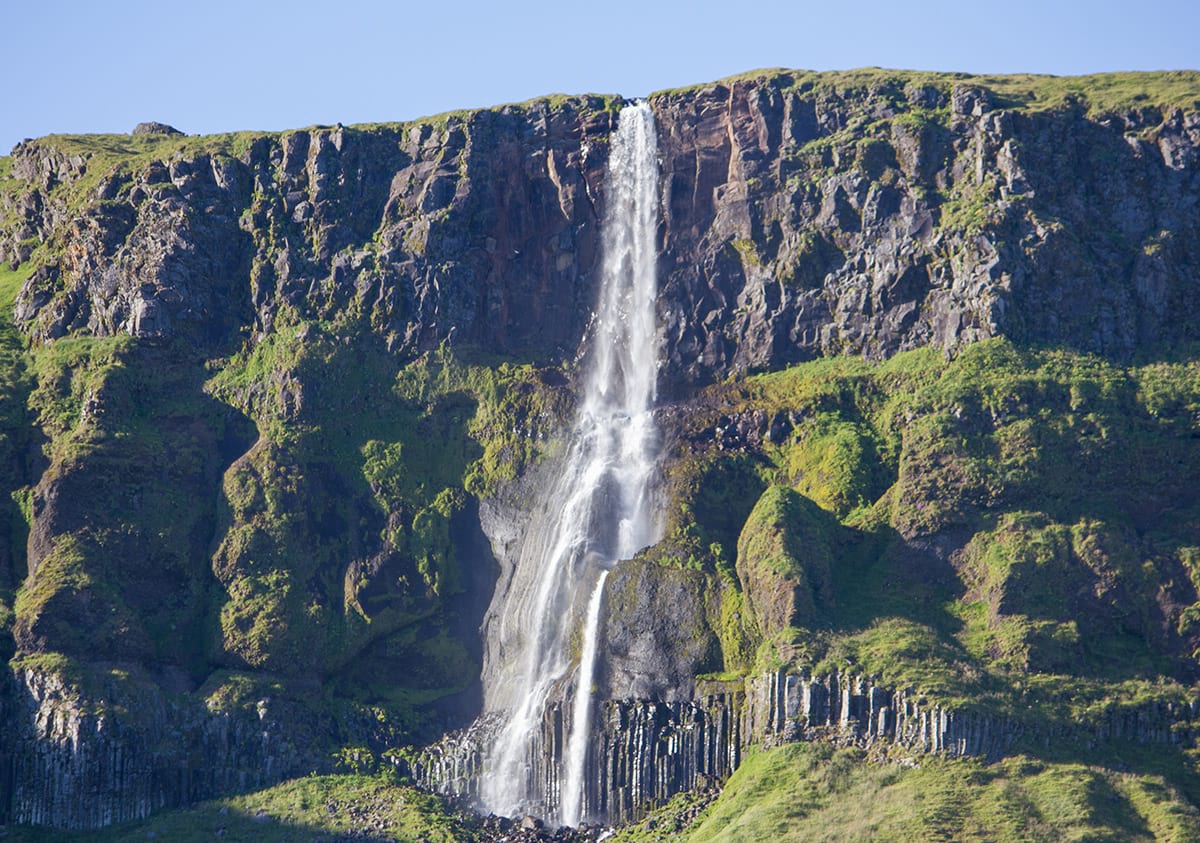 Or, I could wait until a friend of mine buys the farm under Bjarnarfoss, something he’s been threatening to do for some time. Even in winter, I could see why. It’s a baffling beautiful part of the country and one that I would gladly spend months or even years exploring.

The schedule for Saturday was to explore the north side of the peninsula with special emphasis on the towns of Stykkishólmur and Grundarfjörður. After a short rest stop at the Hotel Rjúkandi, which is located at the crossroads, we headed north over the heath. We stopped at the swimming pool first for some much needed relaxation in Stykkishólmur. This town is the home of a ferry, which can take you quickly across Breiðafjörður to the West Fjörds, thereby saving you several hours of driving. I made a mental note to take this trip next. 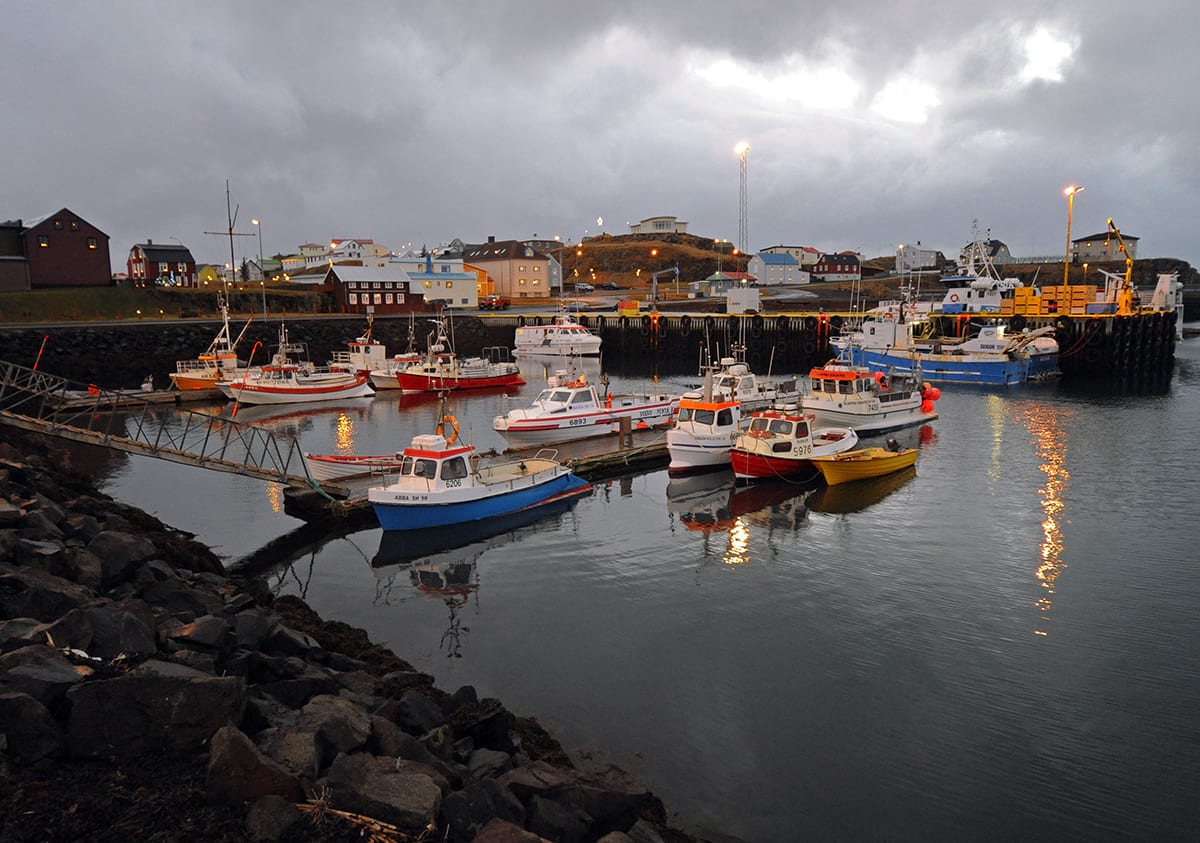 There were plenty of attractions to see in Stykkishólmur, including the Volcano Museum in the center of town and the Water Museum at one of the town’s highest points, which we had some trouble finding in our car making multiple u-turns and getting flipped off by the local residents for our tourist driving. Oops.

After a great lunch at Narfeyrarstofa (est. 1906), we got on the road again and headed west to Grundarfjörður, the home of one of this website’s founders. Kirkjufell is one of those iconic mountains in Iceland, with its sharp peak taking the center stage in the many photographs of the northern lights that visitors to the island take. Being there in person, however, I was much more impressed by the Kirkjufellsfoss - a small (for Iceland) waterfall that had crusted over with ice due to the cold March winter. 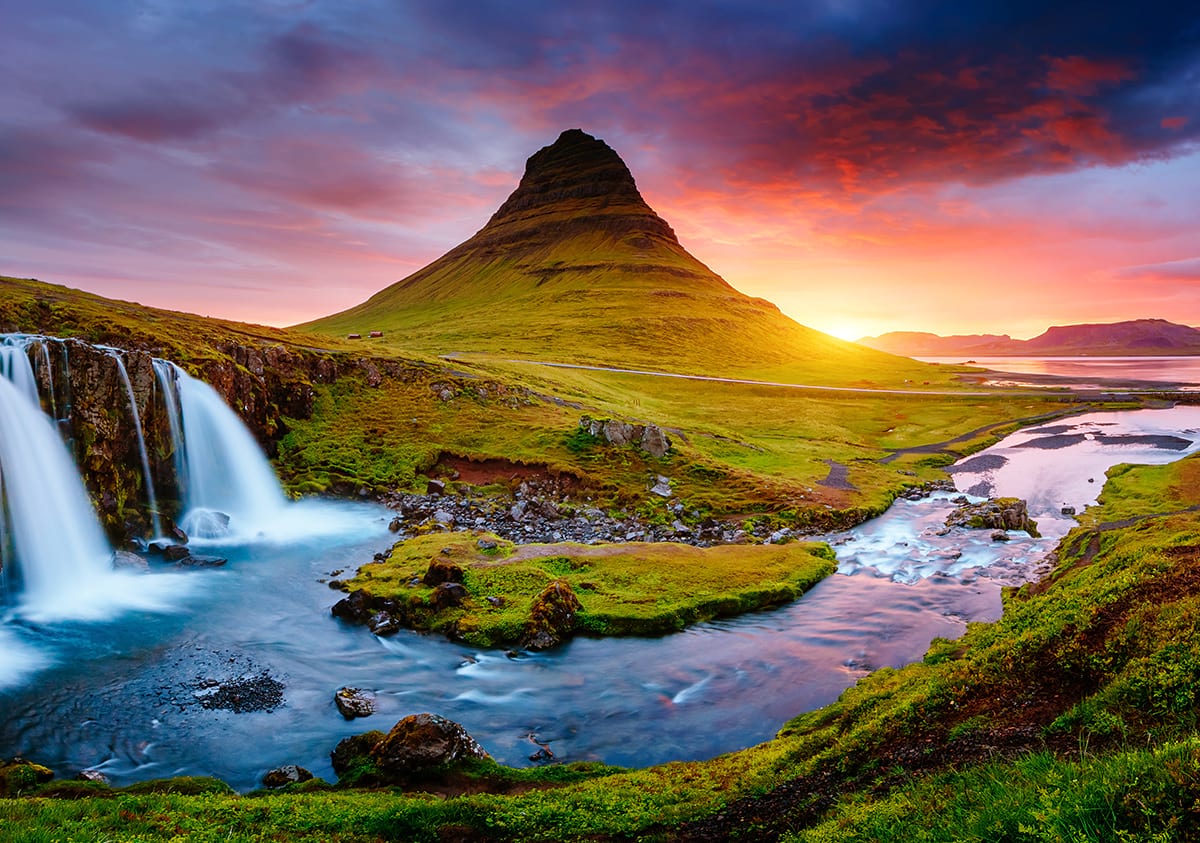 With a weather warning on the horizon, we breezed through the town of Ólafsvík, marvelling that there were towns out here at all (hint: it’s due to the fisheries) and headed once more back to our cabin for the night. You can drive all the way around the peninsula and really it is in these far off places where the view of the ocean stretching out in front you really hits you. Every time I see the way the sun shines through clouds over the Atlantic Ocean, it makes me happy to live here. 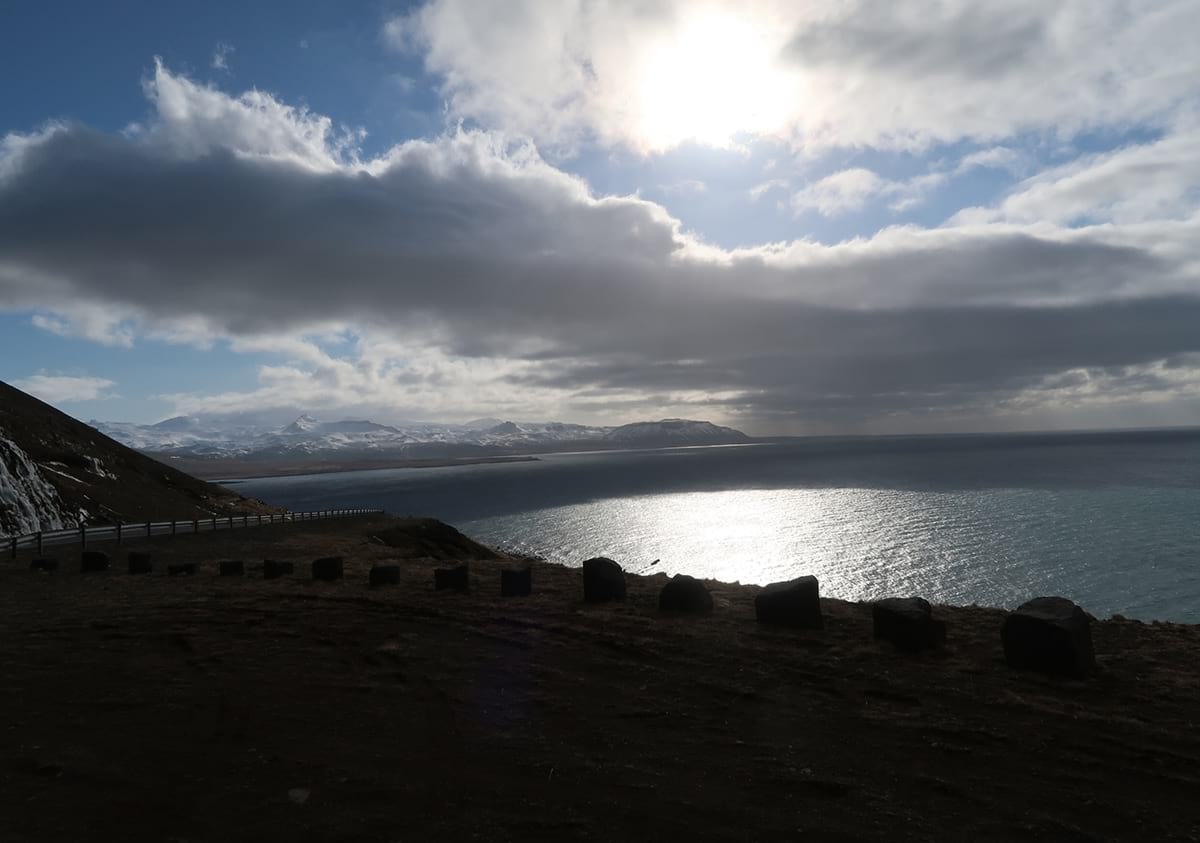 Our long weekend in Snæfellsnes came to an end with an Easter Egg hunt and a quick job packing up our belongings and heading to Reykjavik again. There was a storm warning, although you wouldn’t have been able to tell from the way the sun was shining.