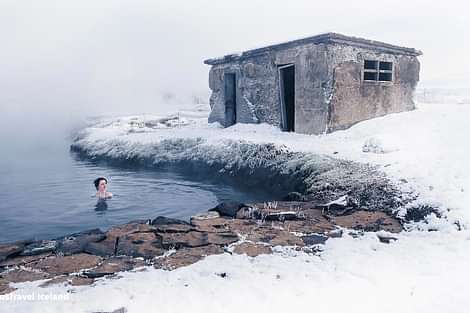 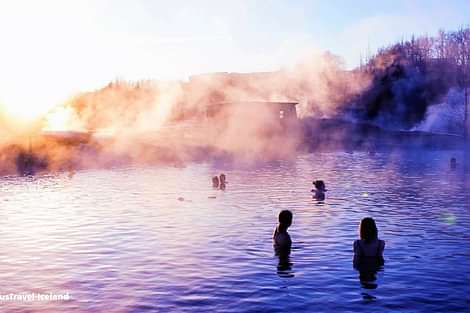 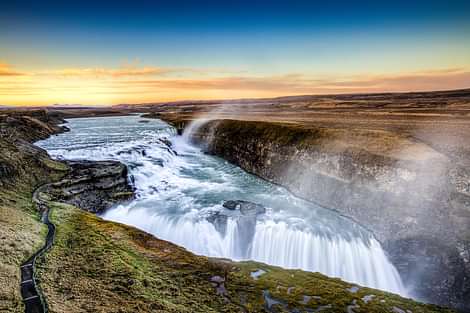 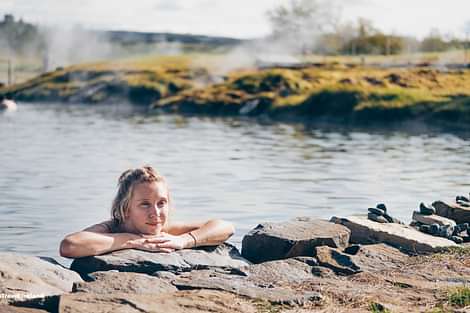 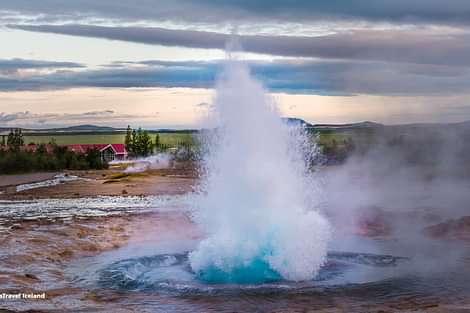 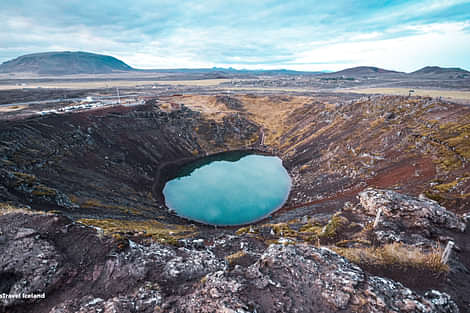 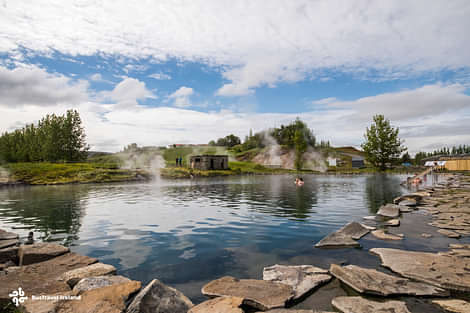 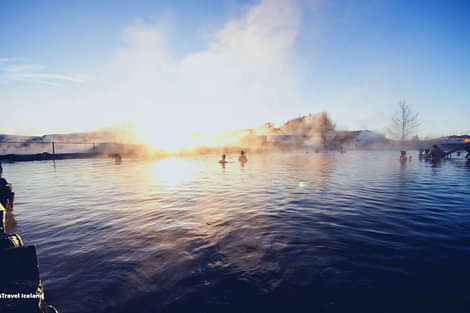 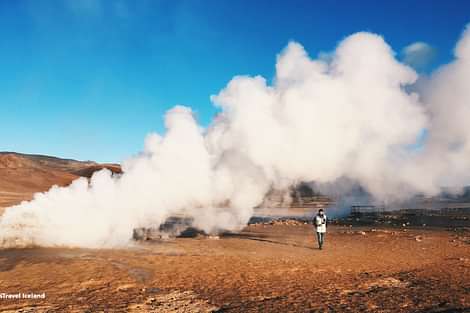 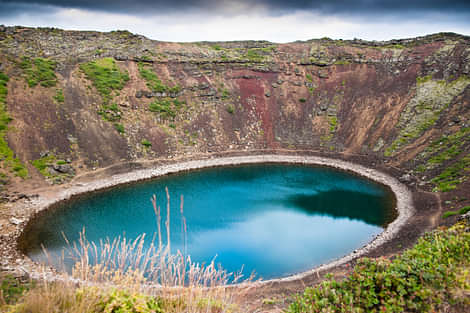 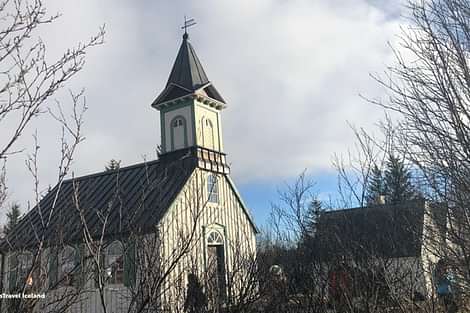 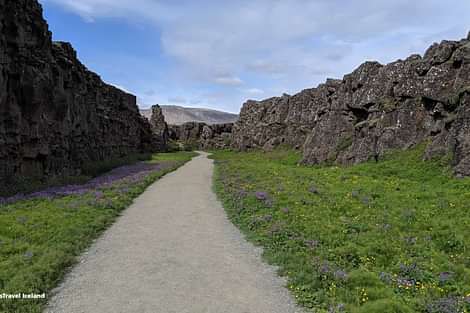 On our Golden Circle & Secret Lagoon Tour you will experience a series of remarkable and diverse sites in the Southwest of Iceland.

Start the day with a leisurely swim in the Secret Lagoon, one of the oldest natural geothermal pools in Iceland, nestled amongst bubbling hot springs and a small erupting geyser. Steam rises from the surrounding geothermal area as you relax in the warm mineral-rich water, which holds at 38-40*C year-round.

Then we embark upon the quintessential Icelandic tour to the Geysir geothermal area in the Haukadalur valley, where the Strokkur fountain geyser spouts water high into the air every few minutes, before visiting the majestic “Golden Waterfall” of Gullfoss, considered by many to be Iceland’s most beautiful waterfall.

Then onward to the historic geological wonder Þingvellir National Park, which is not only the seat of the world’s oldest still-functioning parliament (where the Icelandic Alþingi first convened in 930 AD) but is considered the best place on earth to view the geologic meeting point of the North American and Eurasian tectonic plates, pulling apart year by year.

Join us for a day that balances relaxation with exploration.

The first step to this great combo tour is our fast and efficient pick up service. We will come to pick you up you from either, one of the hotels in the centre of Reykjavik or from one of the many pick up spots dotted across the city. Once everyone is accounted for we will begin our drive towards our first stop, Kerid the volcanic crater lake.

Kerid is an extremely colourful crater-lake formed in a volcanic eruption some 6500 years ago when former volcanic cone collapsed within it's own magma chamber. The crater is decorated with bright red volcanic rock and mesmerising green blue lake at the bottom. Hiking paths take you around the crater's rim for a full view of the phenomenon and surrounding landscape. There are also paths leading you down into the craters bottom for a nice stroll around the lake. The crater has been a great source of inspiration for many artists and number of concerts have been held within the craters arms.

A good 30 min drive is the tour's treat, the Secret Lagoon. Originally known as Gamla Laugin (the old pool), this hot spot in the town of Fludir is is Iceland's oldest swimming pool, created in 1891 . The surrounding scenery with steam vents, bubbling pools combined with the artistic evidence of the past create a unique ambiance. There is nothing in the world quite like letting all your worries melt away in these hot waters whilst also feeling the history of the generations of people who have done so before you.

Following on from your trip to one geothermal marvel we then take you to another, the Geysir geothermal area. The area is named after the “Great Geysir” a large geyser in the area that interestingly is one of the first of its kind to be mentioned in texts. As a result the Great Geysir is actually the origin of the English word Geyser. Due to its age, the old Geysir no longer erupts of its own volition but his younger cousin, Strokkur, has stolen the show and erupts naturally every 5 to 10 minuets. A big visitors centre is at Geysir where offering many lunch options and great souvenirs.

Only a 5 min drive from Geysir is the tours next highlight, the golden waterfall Gullfoss. Gullfoss is an impressive waterfall that drops around 32 meters over two different stages. It is fed from the glacier waters of Hvítá river which originates from Iceland’s 2nd biggest glacier, Langjökull. To add on to the stunning beauty of Gullfoss, the conditions around the waterfall often create colourful rainbows and magical golden light. Walking paths in the area allow you to explore and take in the wonders from different angles and levels.

Last but not least comes Þingvellir (Thingvellir) National Park. This is the site where the world's first parliament was formed (that is still active) when the old Viking group leaders from all corners of the country decided to join together on a yearly basis to discuss affairs and settle disputes by making and amending laws rather than using the sword. This area is not less important and impressive for being the location where the Eurasian and American tectonic plates separate from one another, creating an outstanding landscape with big open fissures and a Rift Valley.

Walking paths take you in-between the walls of the biggest fissures called Almannagjá and lead you in the footsteps of the Vikings, through past the Parliament site and up to the viewing point of Hakið.

Once mind, body and soul are enriched with these fantastic examples of both Icelandic culture and nature we will drive back to the city to wrap up the day.

Make sure to note down your pickup time and location. Pick-up can take up to 30 minutes starting from the time on your ticket. We collect our guests with several (mini)busses, so please be aware that you may need to change busses at a meeting point before the tour begins